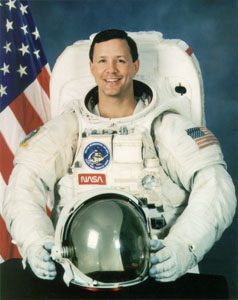 Captain Pierre J. Thuot is a distinguished graduate of the United States Naval Academy. He earned his master’s degree from the University of Southern California and an honorary doctorate from Coastal Carolina University.

Thuot flew the F-14 Tomcat in the U.S. Navy, and is a graduate of TOPGUN and the Harvard Business School Advanced Management Program. In June 1985, Thuot was selected by NASA to be an astronaut. He is a veteran of three space flights: STS-36 aboard Atlantis in 1990, STS-49 aboard the first flight of Endeavour in 1992 and STS-62 aboard Columbia in 1994. During STS-49, he performed three space walks that resulted in the capture and repair of a stranded commercial communications satellite.

He left NASA in 1995 to become the associate chairman of the Aerospace Engineering Department at the U. S. Naval Academy. His final Navy assignment was with the National Reconnaissance Office as a program director. Thuot retired from the Navy in 1998 and became a vice president with Orbital Sciences Corporation. In 2002, he became the executive vice president and chief operating officer at HawkEye Systems, LLC, a subsidiary of Gray Hawk Systems, Inc.

In 2004, he was named president and chief executive officer of HawkEye Systems, which was acquired by ManTech International Corporation in 2005. Thuot is currently a senior systems engineer at the Johns Hopkins University Applied Physics Laboratory in the Lexington Park field office.

Thuot logged 654 hours in space, including 17 hours on three space walks. He traveled 11.4 million miles in space and orbited the Earth 437 times. He has more than 3,500 flight hours in more than 50 different aircraft, and has more than 270 carrier landings under his belt. He is the recipient of 18 team achievement awards and 11 personal awards including three Defense Superior Service Medals, the Legion of Merit, the Defense Meritorious Service Medal and the Meritorious Service Medal. Thuot held the U. S. National and Absolute world records for extravehicular (EVA or space walk) duration in space from 1992 until 2001.

Rick is an oceanographer at APL, where he has worked for the past 40 years. He conducts research into a wide range of technologies for remotely sensing ocean waves and currents. Rick teaches the course “The Physics of Remote Sensing” for the Applied Physics program. He has taught at EP since Spring 2016, when he inherited his course from retired faculty, Dr. Rich Gasparovic. Rick originally taught face-to-face and won the New Instructor Award that first year! He then converted the course to the online format this past spring and is teaching the course this fall.

Ramsey is a hardware designer at APL in the Space Exploration area, where he has worked since 2008. He has been teaching in the Electrical and Computer Engineering program at EP for 8 years and previously taught at UNC Charlotte. In 2016, Ramsey won the Exceptional Online Course Design Award for his course, “FPGA Design Using VHDL.” He taught the classroom version of the course for 6 years before converting it to the online format in 2015.

Deborah’s career has spanned multiple decades, all in environmental protection and policy, in both the public and private sector. She has been at the EPA for the past 20 years, where she focuses on radioactive waste management. She teaches three courses in the Environmental Planning and Management program for EP. She and co-instructor Seema Schappelle won an award for Exceptional Online Course Design for their course “Environmental Policy Needs in Developing Countries.” She has taught online at EP since Spring 2015 and previously taught in the classroom at George Mason University.

Wondering how to really make your online course stand out? Curious about what other instructors are doing in their courses? Join a panel of the “Best Online Course Design” faculty award winners for a discussion about online course design and educational technology tools. Hear from experienced faculty on student engagement, course content strategies and best practices in online learning. Come with your questions and curiosity.

With the availability of online resources, it is easier than ever to plagiarize. Why do students plagiarize and how can we as faculty help them avoid plagiarism in their academic work? In this interactive session, discover the surprising range of actions that constitute plagiarism and what pushes students to plagiarize. We’ll explore SafeAssign, a plagiarism detection tool within Blackboard that can help detect instances of plagiarism within each student submission and educate students on avoiding plagiarism.

The explosion of 360 degree content that can be shared across Facebook and YouTube opens us up to a new form of immersive storytelling. Exploring this world of 360 photography and video, which more closely matches our experiences, is almost like seeing for the first time. If you’ve ever wanted to develop your own immersive experience for your courses, then this workshop is for you. Filming a 360 video/photo can be challenging, but the Center for Learning and Design has many of the tips and tricks you need. In this workshop, we will distinguish between VR, AR and Mixed Reality. We will explore a number of 360 videos and figure out what makes them effective. This workshop will show you what tools you’ll need to capture, edit and display your very own 360 video or photo on YouTube, Thinglink or Facebook.